View Sakaw Mill Woods homes for sale for current listings of houses, duplexes and condos for sale in this neighbourhood located in southeast Edmonton that is part of the larger Mill Woods subdivision.  As we finish 2014, the average sale price for a single family detached house in Sakaw for the year is now sitting at $363,635.   Compared to last year, in 2013 the average selling price for a single family detached house in Sakaw was $342,999.  That is an increase of 6% for the average annual sold price.  Looking at the entire Millwoods neighbourhood, the average sale price for a single family house in Mill Woods in 2014 has been 356,845.  The average sale price amounts above are calculated on a single family detached home sale; the other property classes such as duplexes or condominiums are not included in these average selling price stats.  In the upper end / luxury price segment of the Sakaw Edmonton real estate market, the highest price that a home sold for so far in 2014 has been $600,000. That home that sold was huge!  Over 4000 square feet with a triple garage.  At the lower end of the market, in the starter home price segment of Sakaw,  the most affordable home in the neighbourhood this year sold for $290,000.  The home was a two story style home that was under 1200 square feet, and it did not have a garage.  On average it takes 32 days to sell a home in Sakaw Edmonton this year. That is approximately a week faster than the Edmonton average days on market of 40 days in 2014.  In the entire Mill Woods area, the average days on market has been 32 days as well.  Looking back to 2005 at property values in Sakaw, the real estate property values in the Sakaw neighbourhood have increased by 97%.

Lastly, in the Sakaw Edmonton condo market, the average selling price for a condo in the neighbourhood so far this year has been $249,361 with an average time to sell a condo in Sakaw of 36 days.  The condo complexes that have had units sell in them this year in Sakaw include: Arbour Glen, Sunrise Village and Springs Carrington. 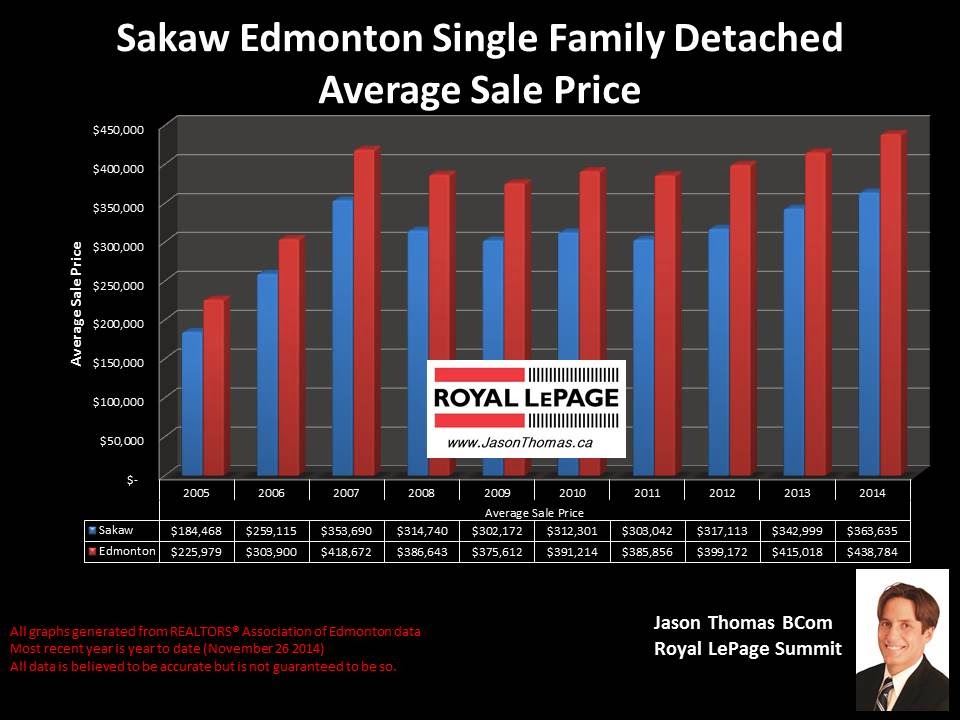