Visit Canora Homes for sale for the current listings of houses, duplexes and condominiums for sale in this neighbourhood located in west central Edmonton. As we finish 2014, the average selling price for a single family detached house in Canora for the year has just passed over the $300,000 threshold.  Canora homes are selling in on average for $300,705.  Comparing that to last year, in 2013 the average selling price in Canora was $283,727, or in other words the neighbourhood has seen a 6% increase in annual average sale prices.   These average selling price values above are calculated on a single family detached home sale; the other property classes such as duplexes or condominiums are not included in these average selling price stats.  In the upper end / luxury price segment of the Canora Edmonton real estate market, the highest price that a home sold for so far in 2014 has been $437,000. That particular sale ended up selling higher than list price and also had a basement suite.  It was roughly 1600 square feet and it was a two story style home.  At the lower end of the market, in the starter home price segment of Canora,  the most affordable home in the neighbourhood this year sold for $175,000.  That home was a small 700 square foot 2 bedroom home with a partial basement.   On average it takes 42 days to sell a home in Canora Edmonton this year. That is basically the same as the Edmonton average days on market of 40 days this year.  Looking back to 2005 at property values in Canora, the real estate property values in the Canora neighbourhood have increased by a healthy 108%.

In the duplex / attached home market in Canora Edmonton, the average sale price for a duplex in 2014 has reached $312,654. On average it is taking 55 days to sell a duplex in Canora this year. Roughly 15% of the duplexes sold were infill homes built in 2014.

Lastly, in the Canora Edmonton condo market, the average selling price for a condo in the neighbourhood so far this year has been $121,433 with an average time to sell a condo in Canora of 65 days.  The condo complexes that have had units sell in them this year in Canora include: Courtyard Manor, Jasper Gate, Marilyn and Lynn Manor, as well as some newer complexes that have not been named as of yet. 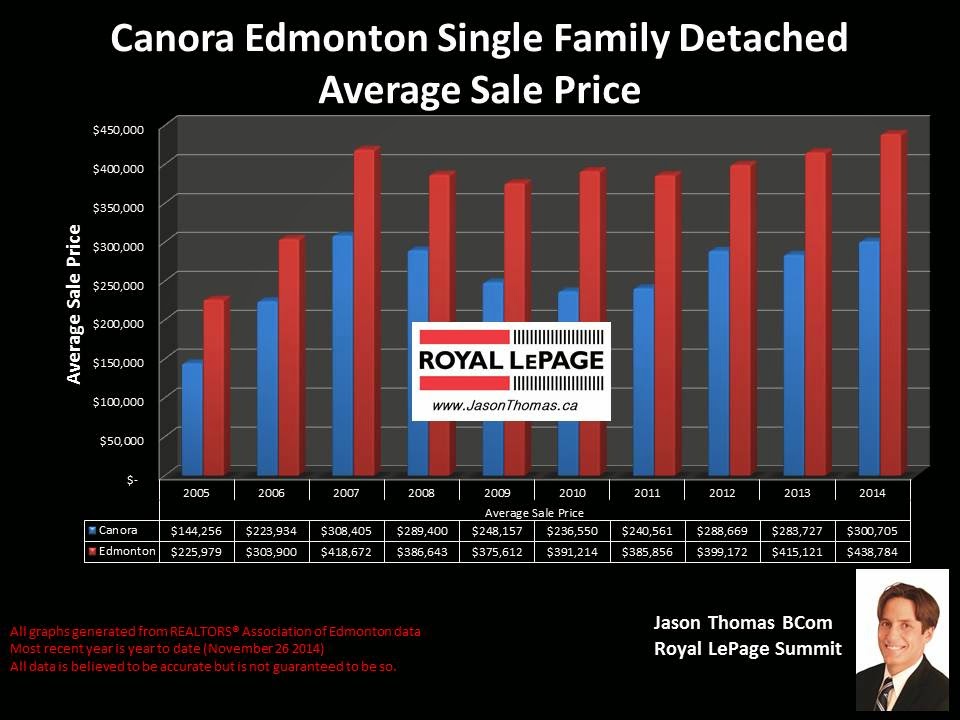