Visit Caernarvon Castledowns Homes for Sale  for active listings of houses, duplexes and condos for sale in this Castledowns area Edmonton neighbourhood. In 2014, the average sold price for a single family detached home in Caernarvon has now reached $346,173.  Comparing that value to last year, the average selling price in Caernarvon was lower at $332,868.  These selling price stats above are based on a single family detached home sale; the other property classes such as duplexes or condominiums are not included in these average sale price stats. Looking at the broader area of Castledowns, the average sold price in Castledowns has been $427,521 so far in 2014, and the average time to sell a home in Castledowns this year has been 46 days.  In the upper end / luxury price segment of the Caernarvon Edmonton real estate market, the highest price that a home sold for so far in 2014 has been $454,000.  That home was an executive bungalow that was in the 1500 square foot range and it also had a double attached garage.  At the entry level end of the price range, the lowest sale price for a home in 2014 in Caernarvon sold for $270,000. That was one of only three homes this year that sold for a value of less than $300,000 in Caernarvon.  The home that sold for $270,000 was a four level split style home with an unfinished basement.  On average it has taken 39 days to sell a home in the Caernarvon Edmonton neighbourhood year to date, that basically the same as the Edmonton average days on market of 40 days in 2014.  Going back to 2005, real estate property values in the Caernarvon neighbourhood have appreciated by 87%.

Moving over to the duplex / rowhouse market in Caernarvon, this market currently is selling on average for $240,000 this year.  On average, it is taking 55 days to sell a duplex in the neighbourhood in 2014.

Finally having a look at the condo market in Caernarvon, the condo market now has an average selling price year to date in 2014 of $176,259.  On average it takes 56 days to sell a condominium in Caernarvon this year. The highest price that a condo has sold for in the neighbourhood this year has been $237,000, and the most affordable condo in the neighbourhood sold for $106,500. The condo complexes that have had units sell in them this year in Caernarvon include: Autumn Woods, Castle Terrace, Cedar Grove, Heritage Estates, Northwood Village, Plaza 2000, Westcastle and Woodridge 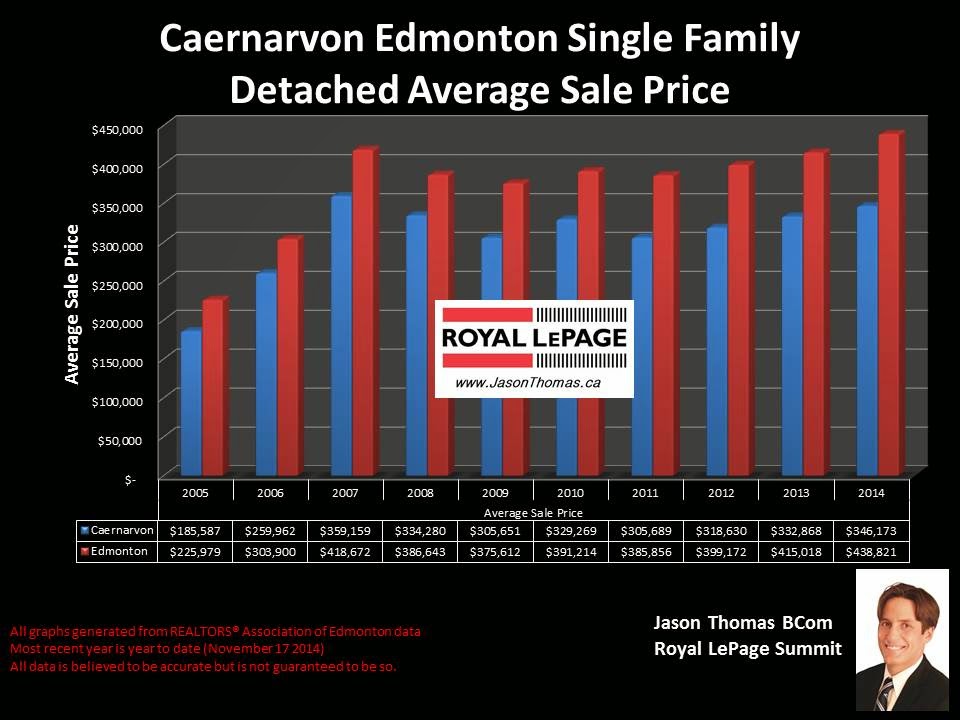