View Bisset Mill Woods Homes for sale for active listings of houses, duplexes and condos for sale in this southeast Edmonton neighbourhood. As we are finishing 2014, the average selling price for a single family detached house in Bisset for the year has reached $356,192.  Comparing that to 2013, last year the average sold price for a home was only $317,391, that works out to a 12% price increase year over year.   In the entire Mill Woods area, the average sale price for a single family home has been $356,614 so far in 2014, almost identical to the Bisset average.  These average sale price statistics above are calculated on a single family detached home sale; the other property classes such as duplexes or condominiums are not included in these average selling price values.  In the upper end / luxury price segment of the Bisset Edmonton real estate market, the highest price that a home sold for so far in 2014 has been $413,000. That particular sale was a home a two story that was approximately 2200 square feet, it had a front attached garage.   At the lower end of the market, in the starter home price segment of Bisset,  the most affordable home in the neighbourhood this year sold for $307,500.  That home was a 2 bedroom bilevel roughly 800 square feet.   On average it takes 30 days to sell a home in Bisset Edmonton this year. That is quicker than the Edmonton average days on market of 40 days this year.  Comparing property values in Bisset back to the year 2005, the real estate property values in the Bisset neighbourhood have increased by 88%.

In the duplex / attached home market in Bisset Edmonton, the average sale price for a duplex in 2014 has reached $275,000. On average it is taking only 13 days to sell a duplex in Bisset this year.

Lastly, in the Bisset Edmonton condo market, the average selling price for a condo in the neighbourhood so far this year has been $196,257, with an average time to sell a condo of 39 days.  The condo complexes that have had units sell in them this year in Bisset include: Bisset Bay, Kingsgate,  Millowview, Paradise Village, and Ridgewood Gardens. 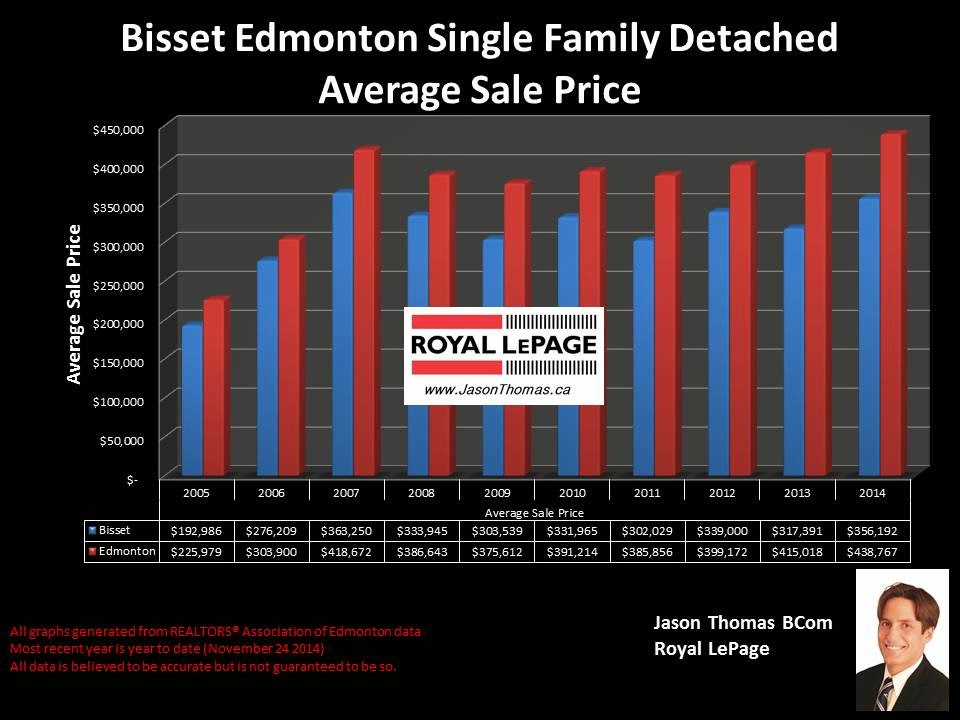