Visit here for all Rosslyn Homes for Sale in Northeast Edmonton.  The average selling price for a home in Rosslyn year to date in 2014 has been $313,685.  This is only the second time that the neighbourhood has managed to have an annual average selling price that is higher than $300,000, the previous year that this occurred was 2007.  The average sale price in Rosslyn is above the 2013 average selling price of $292,682.  Rosslyn historically tends to sell for approximately $100,000 to $120,000 less than the Edmonton average sale price.  The average price is lower in Rosslyn due to a higher percentage of basementless bungalows that are in the neighbourhood.  These homes will sell well under the average price.  These selling price average statistics are based on what a single family detached house sold for in the neighbourhood, the other styles of homes namely duplexes or condos are not included in these stats.  Looking at the upper end of the Rosslyn real estate market, the highest price that a home sold for so far in 2014 has been $402,000.  Meanwhile, at the other end of the sale price range, the most affordable home in Rosslyn sold for $238,000.  On average it is taking 26 days to sell a home in Rosslyn, that is quite a bit quicker than Edmonton average days on market in 2014 of 38 days.  Since 2005, property values in Rosslyn have appreciated by 93%.
In the duplex market of Rosslyn, the average sale price for a duplex is currently sitting just under $300,000 at $299,666.  The average days on market for a duplex in the area has also been 26 days this year. 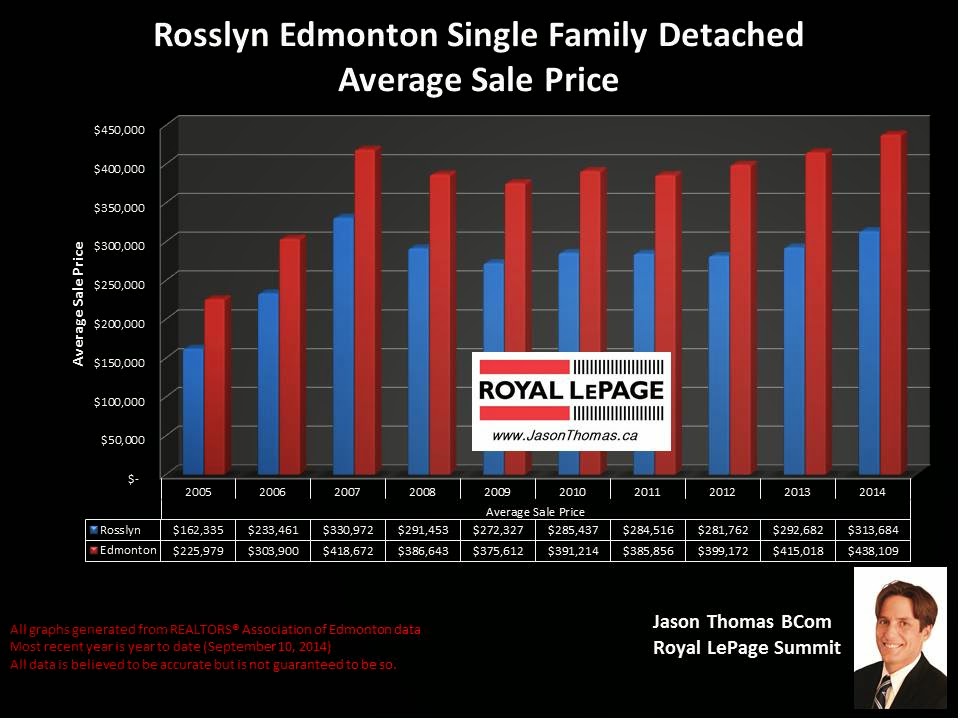