Visit Matt Berry homes for sale for all active listings in this northeast neighbourhood of Edmonton.  The average selling price for a house in Matt Berry so far year to date has been $441,541. Matt Berry tends to sell just above the overall Edmonton average sale price each year.    The 2014 average sale price in this northeast Edmonton neighbourhood is above the 2013 average sold price of $428,533. These selling price average stats are based on what a single family detached house sold for in the neighbouhood, the other types of homes namely duplexes or condos are not included in these statistics.  Looking at the upper end of the Matt Berry real estate market, the highest price that a home sold for so far in 2014 has been $567,000.  That sale was for an executive bungalow that had a fully developed basement and was close to 1600 square feet.     Meanwhile, at the other end of the price range spectrum, the most affordable home in the neighbourhood sold for $350,000.  That home was a smaller 4 level split that sold.  On average it is taking 54 days to sell a home in Matt Berry, that is slower than the Edmonton average days on market in 2014 of 38 days.  Since 2005, property values in Matt Berry have increased by 76%.
Moving over to the duplex market of Matt Berry, the average sale price for a duplex is currently $320,450  And, the average days on market  for a duplex in the area has been only 10 days to sell this year.  Considering that a week to 10 days is the common length of time for conditions to be removed, means these duplexes had an offer written on them quite quickly.

In the Matt Berry condo market, the average sold price for a condo in 2014 is currently $270,900.  On average, it is taking 38 days to sell a condo in Matt Berry this year.  The highest that a condo has sold for in 2014 has been $354,000 and the most affordable condo sold for $205,000.  The condo complexes that have had units sell in them over the last 12 months in this North side neighbourhood include: Hudson Condominiums, McLeod Estate and McLeod Ridge. 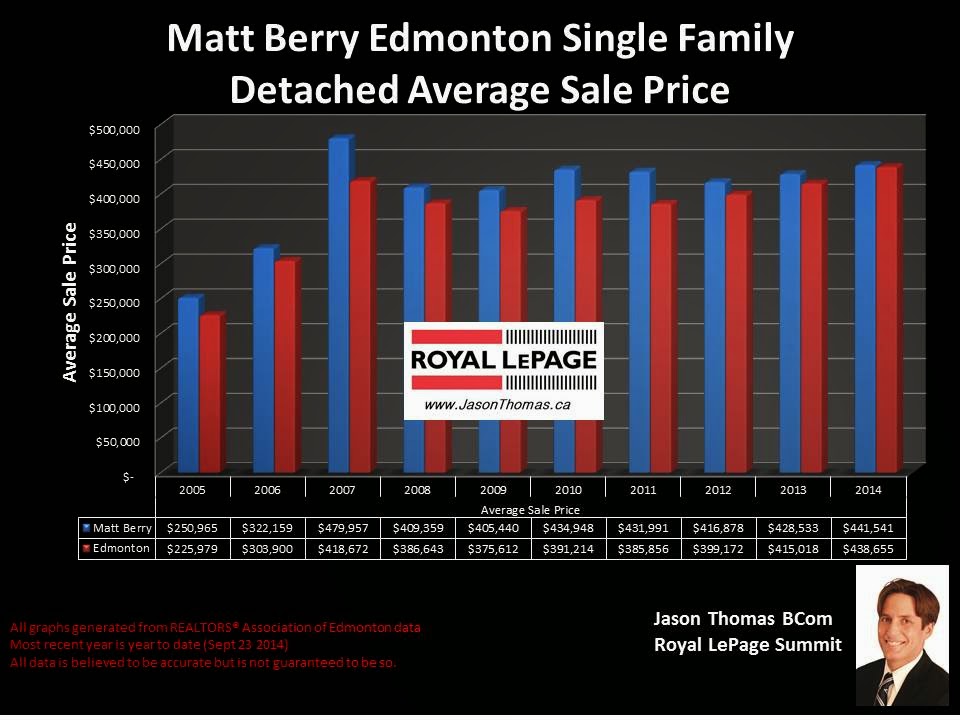