Click Strathcona Edmonton homes for sale for active home listings in this south central Edmonton neighbourhood. The average selling price for a home in the Strathcona Edmonton neighbourhood year to date has reached $532,419.  This is lower than the 2013 average sale price in Strathcona of $550,585.  The reason for the drop in the price was the size of homes that sold in 2014 were roughly 200 square feet smaller in Strathcona versus the sales in 2013.  On a selling price per square foot, the homes in Strathcona sold for $389 per square foot in 2014 and only sold for $350 in 2013.  Regarding the average selling price stats, the numbers above are based on what a single family detached house sold for in the neighbouhood, the other types of homes namely duplexes or condos are not included in these statistics. In the upper end or luxury price segment of the Strathcona real estate market, the most that a home sold for so far in 2014 has been $1,317,508, almost identical to the highest priced sale in 2013 of $1,310,000. The highest sale in 2014 was a home that just under 4000 square feet and it was a three story style home.  Having a look at the entry level of the price range in Strathcona, the most affordable home this year has sold for $342,500.  That sale was basically sold for lot value and was under 700 square feet.    It is taking 24 days on average to sell a home in Strathcona so far in 2014, that is much quicker than the Edmonton average days on market in 2014 of 39 days.  Since 2005, real estate property values in Strathcona have appreciated by 94%.

Lastly, moving over to the condo market in Strathcona, the average sale price for a condo year to date in 2014 has been $277,663. On average, it is taking 57 days to sell a condo in this south central Edmonton neighbourhood this year.  The most expensive condominium in Strathcona that sold in 2014 was a unit in the One River Park, that over 2000 square foot unit sold for $1,587,500. The condo complexes that have had units sell in them over the last 12 months in the Strathcona neighbourhood include: 9929 Saskatchewan Drive, Andrea Manor, The Blue Danube, Brantford Manor, Brownstone Lofts, Cardero Loft, Chinook Condominiums, Cranleigh Towers, Element Lofts, Heritage House, The Langham, Lord Strathcona Manor, Masterpiece off Whyte, Melrose Place, Ninety Nine Condos, One River Park, The Rembrandt, Seymour Place, South Bank, Southern Place, Southwinds, Strathcona Square Suites, Strathcona Terrace, Terrace 84, Waterford House, Waters Edge, and Whyte Champagne. 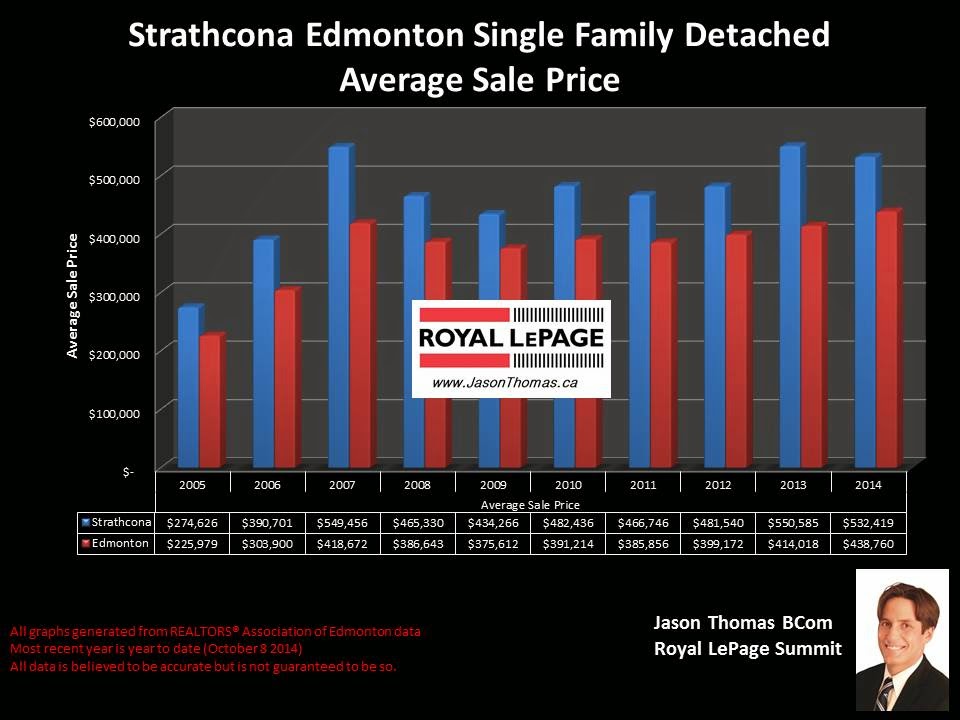