Visit Rutherford homes for sale for active home listings in this southside of Edmonton neighbourhood. The average selling price for a house in Rutherford so far year to date has been $487,786.    The 2014 average selling price in this south Edmonton neighbourhood is up from the 2013 average sold price of $453,375. Rutherford on the south side of Edmonton is similar to The Hamptons in the west end of Edmonton in that they both have a high proportion of young children in the households.  The average selling price is similar for both neighbourhoods, and both neighbourhoods have recently built schools in them. The average selling price stats are based on what a single family detached house sold for in the neighbouhood, the other types of homes namely duplexes or condos are not included in these statistics. In the upper end price segment of the Rutherford real estate market, the highest price that a home sold for so far in 2014 has been $2,100,000.  However this sale was an exception, it was located on 127 street and is along a row of homes on larger lots that have been built over the years prior to Rutherford being developed.  The next highest sale for the Rutherford neighbourhood was for a large executive bungalow that sold for $628,500.    Moving over to the entry level of the price range in the neighbourhood, the most affordable home this year has sold for $345,000.  That home was a 2 story style home that was roughly 1200 square feet, the home did not have any basement development and it also did not have a garage.   It is taking 41 days on average to sell a home in Rutherford so far in 2014, that is very similar to the Edmonton average days on market in 2014 of 39 days.  Since 2005, real estate property values in Rutherford have increased by 91%.

In the Rutherford duplex and rowhouse market, the average sale price in 2014 for a duplex/rowhouse has been $350,300, with an average time to sell of 20 days.

The Rutherford condo market, currently has an average selling price for a condo in 2014 of $268,090.  On average, it is taking 51 days to sell a condo in Rutherford this year. The condo complexes that have had units sell in them over the last 12 months in this south Edmonton neighbourhood include: Crossroads of Rutherford, Elk Run Rutherford, Heritage Landing, Parks of Rutherford, Rutherford Estates, Rutherford Gate, Rutherford Village, Solaris, Spirit Ridge at Rutherford, Tamaya Terrace, Tamaya Wynd and Ventanna Woods. 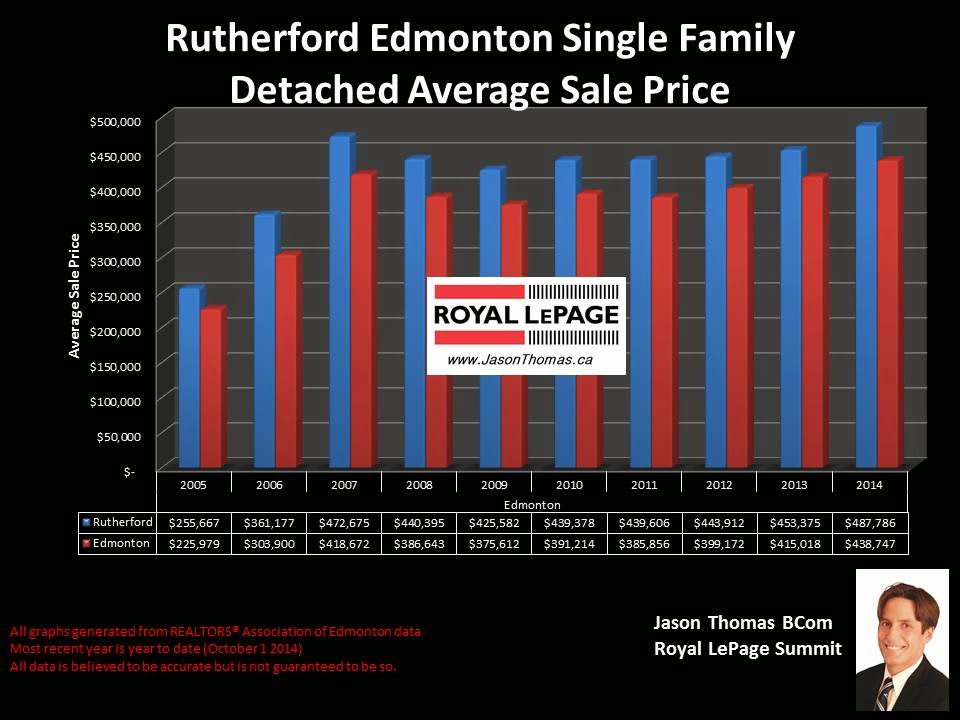