Visit Glastonbury homes for sale for active home listings in this west Edmonton neighbourhood that includes the Grange and Parkland communities. The average selling price for a house in Glastonbury  year to date has now reached $422,754. In 2013, the average sale price for Glastonbury was similar at $422,311. Glastonbury does have a mixture of front attached garages and homes with back lanes and detached garages.  In 2014, there was a higher proportion of homes sold that had detached garages, and as a result the average sale price was lower than normal.  The average selling price stats are based on what a single family detached house sold for in the neighbourhood, the other types of homes namely duplexes or condos are not included in these statistics. In the upper end price segment of the Glastonbury Edmonton real estate market, the highest price that a home sold for so far in 2014 has been $6000,000. This home was a 1700 square foot executive bungalow located in the Parkland Estates area of Glastonbury.    Having a look at the entry level price range of Glastonbury, the most affordable home this year has sold for $325000.  That home was a 2 story style home that was roughly 1350 square feet without any basement development, and also the home did not have a garage.    It is taking 36 days on average to sell a home in Glastonbury so far in 2014, that is a couple days quicker than the Edmonton average days on market in 2014 of 39 days.  Since 2005, real estate property values in Glastonbury have increased by 68%.

Lastly, moving over to the condo market in Glastonbury, the average selling price for a condo year to date in 2014 has been $285,602. On average, it is taking 43 days to sell a condo in the neighbourhood this year. The condo complexes that have had units sell in them over the last 12 months in this west Edmonton neighbourhood include: Aspen Lanes, Californian Parkland, Glastonbury Glenn, Glastonbury Village, Grange Pointe, Pheasant Pointe, Summerhill Lane, Terra Sol Court, Victorian Village and Willow Walk. 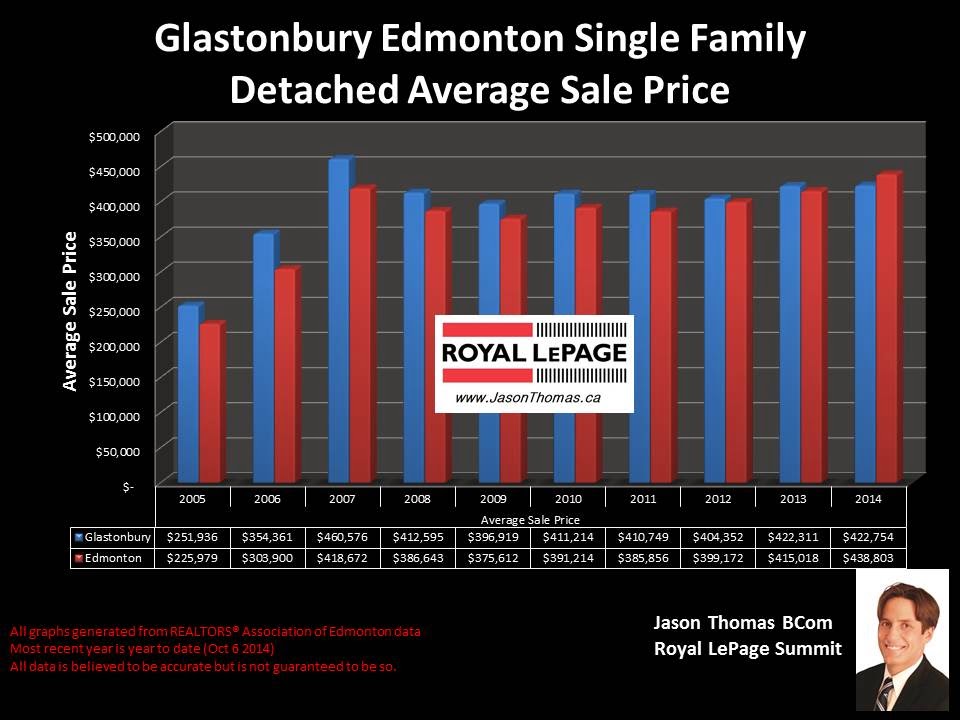