Visit Calder Homes for Sale for listings of houses, duplexes and condos for sale in this northwest Edmonton neighbourhood. In 2014, the average sale price for a single family detached home in Calder is still affordable under $300,000, the average has reached $281,294.   The average selling price in Calder has been fairly flat the last few years, hovering around the $240,000 range, but this year the neighbourhood has finally broken through that range.  The 2014 average sold price has now exceeded the 2007 boom price in the neighbourhood where Calder had an average price of $260,255. The average sale price statistics above are based on what a single family detached house sold for in Calder, the other property classes such as duplexes or condominiums are not included in these statistical values. In the high end / luxury price segment of the Calder Edmonton real estate market, the highest price that a home sold for so far in 2014 has been $490,000.  That sale was for an almost 2000 square foot bilevel that was an infill (newer home built on an older lot).   At the other end of the price range, the most affordable home sale in Calder in 2014 sold for $135,000.  That sale was of a handyman special home, or basically lot value.   On average it takes 37 days to sell a home in Calder Edmonton year to date, which is pretty much the same as the Edmonton average days on market of 36 days in 2014.  Since 2005, real estate property values in the Calder Edmonton neighbourhood have appreciated by a very respectable 102%.

Having a look at the Duplex / Townhouse market of Calder, the average sale price for a duplex in 2014 is currently $311,272.  On average, the time it takes to sell a duplex in Calder this year has been 59 days.  The highest price that a duplex has sold for in the neighbourhood this year has been $823,000 and the most affordable duplex sold for $263,000.

Finally, moving over to the Calder condo market, this market now has an average selling price year to date in 2014 of $165,050. It is taking on average only 23 days to sell a Calder condo this year.  The highest selling price for a condo in Calder this year has been $364,500, and the most affordable condo in Calder sold for only $68,000. The condo complexes that have had units sell in them this year in Calder Edmonton include: Pioneer Apartment and the Capri 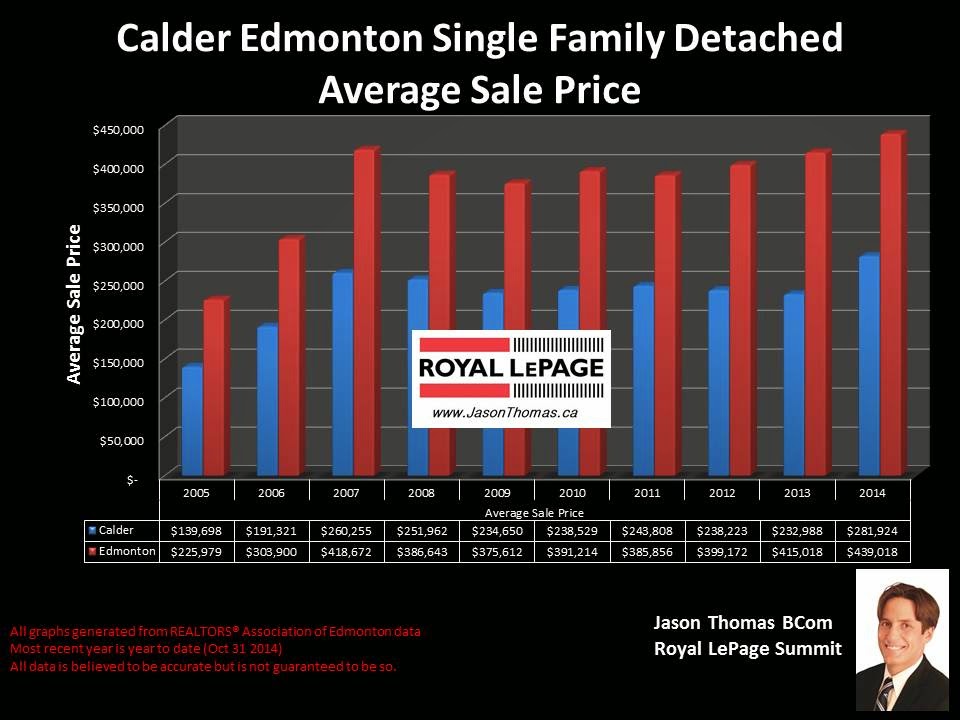