Click Oleskiw homes for sale for active MLS® listings of houses, duplexes, townhomes and condos for sale in this Edmonton Country Club neighbourhood.  Last year, the average selling price for a home in Oleskiw finished the year selling on average for $808,357.  That selling price is up from the average selling price in Oleskiw in 2013, at that time Oleskiw was selling on average for $796,954.  That translates into a year over year increase in Meyokumin of 1.4%. That yearly increase was less than the Edmonton average selling price increase which was 5.8% year over year.  These average selling price values above are based on a single family detached home sale; the other property classes such as duplexes or condominiums are not included in these average selling price values.  Looking at the statistics closer, in the high end price market segment of Oleskiw Edmonton, the highest price that a home sold for in 2014 was $2,200,000.  That home backed onto  Country Club Golf course, had a quadruple garage and was 5000 square feet.   At the other end of the price range, in the entry level market for Oleskiw, the lowest priced home sale in the neighbourhood sold for $427,000. This home was a 1700 square foot two story with a double attached garage.  On average it took 56 days to sell a home in Oleskiw in 2014. This is a little slower than the Edmonton average days on market of 41 days in last year. Going back to 2005, Oleskiw property values have increased by 92%.

In the duplex market in Oleskiw, the average sale price for a duplex in 2014 was $441,650.  On average, it took 167 days to sell a duplex in Oleskiw.  These duplexes that sold in Oleskiw were both adult (18+) age restricted.


Lastly, in the Oleskiw condo market, the average selling price in 2014 was $639,500 with an average time to sell a condo of 73 days in Oleskiw last year.  The condo complexes that have had units sell in them last year in Oleskiw were: Prestige Point and Eagle Point at Country Club 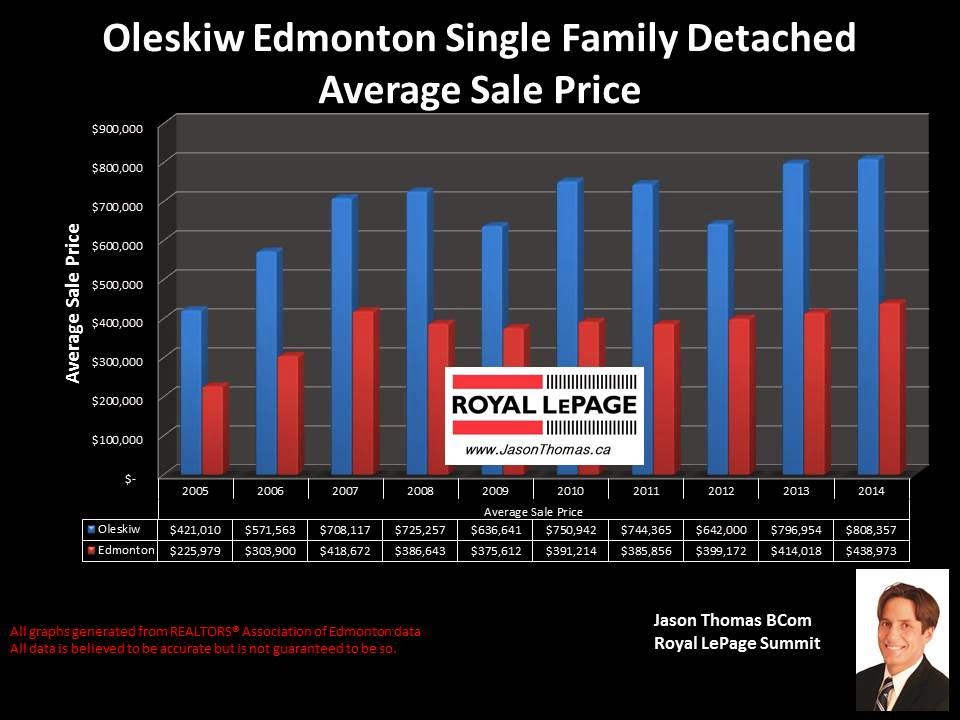