Visit McKernan homes for sale for current active MLS® listings of houses, duplexes, townhomes and condos for sale in this University of Alberta area of Edmonton neighbourhood.  As 2014 ended, the average selling price for a home in McKernan finished the year at $522,620.  That is up from the average sale price in 2013, that year McKernan was selling on average for $495,233.  That translates into a year over year increase in McKernan of 5.2%. That yearly increase was just under the Edmonton average selling price increase of 5.8% year over year.  These average selling price values above are based on a single family detached home sale; the other property classes such as duplexes or condominiums are not included in these average selling price values.  Having a look at the statistics in the upper end price market segment of McKernan Edmonton, the highest price that a home sold for in 2014 was $1,175,000.  That home sale was for a 2600 square foot two story home that was an infill built in 2014.  The home also had a fully developed basement.   In the entry level market for McKernan, the most affordable priced home sale in the neighbourhood sold for $340,000.  This home was a fixer upper / teardown home.   On average it took 37 days to sell a home in McKernan in 2014. This is a couple days faster than the Edmonton average days on market of 41 days in last year. Going back to 2005, McKernan real estate values have increased by a strong 109%.

In the duplex / rowhouse market in McKernan, the average selling price for a duplex finished off 2014 at $657,842  On average it also took 68 days to sell a duplex in McKernan last year.  Most of the duplex sales were in McKernan in 2014 were of newer units built in the last 5 years,  there was only one older duplex sale and that home was built in 1991.   Which is still much newer than the bulk of the homes that were built in the late 1940's and early 1950's in the neighbourhood.

Lastly, in the McKernan condo market, the average selling price in 2014 was $319888 with an average time to sell a condo of 24 days in Magrath last year.  The condo complex that have had units sell in them last year in McKernan was Arden Court. 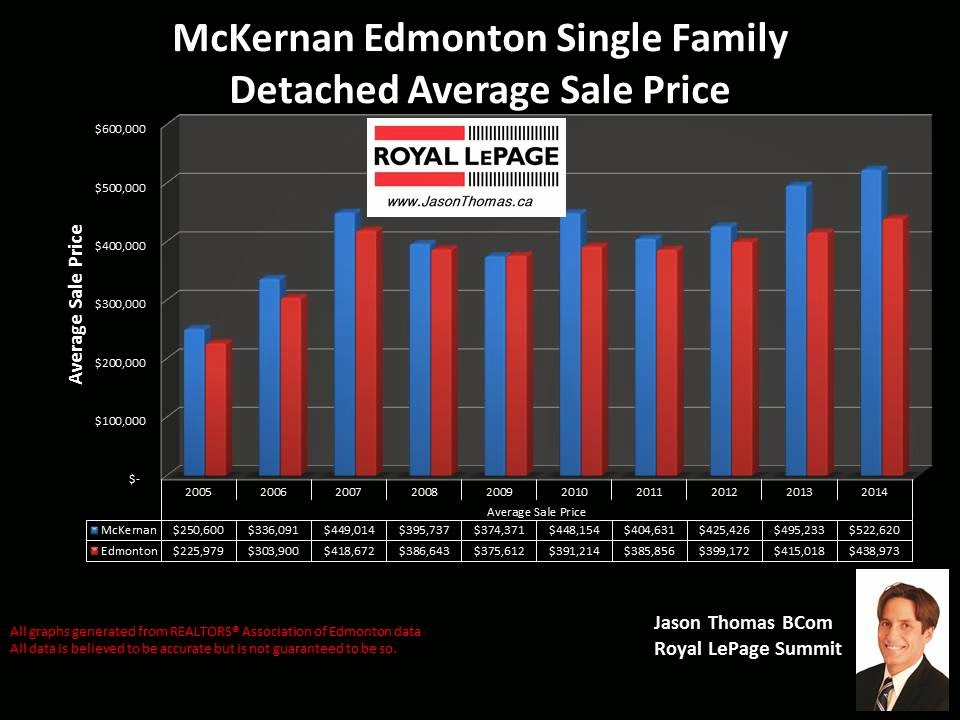