Click Westmount Homes for Sale for active home listings in this west central Edmonton neighbourhood. The average selling price for a home in the Westmount Edmonton neighbourhood year to date has reached $494,215.  This is up from the 2013 average sale price in Westmount of $435,280.  Regarding the average selling price stats, the numbers above are based on what a single family detached house sold for in the neighbouhood, the other types of homes namely duplexes or condos are not included in these statistics. In the upper end or luxury price segment of the Westmount real estate market, the most that a home sold for so far in 2014 has been $1,165,000.  This highest sale in 2014 was a home that just under 2600 square feet, and it was one of two homes so far in 2014 that have sold for more than a million dollars in Westmount.   Having a look at the entry level of the price range in Westmount, the most affordable home this year has sold for $267,000.  That sale was the only sale this year under $300,000 in the neighbourhood.   It is taking 39 days on average to sell a home in Westmount so far in 2014, that is the same as the Edmonton average days on market in 2014 of 39 days.  Since 2005, real estate property values in Westmount have appreciated by 105%.

Lastly, moving over to the condo market in Westmount, the average sale price for a condo year to date in 2014 has been $258,785. On average, it is taking 50 days to sell a condo in this west central Edmonton neighbourhood this year.  The most expensive condominium in Westmount that sold in 2014 was a unit in the Properties on High Street, that was almost 2600 square foot and sold for $1,150,000. The condo complexes that have had the most units sell in them over the last 12 months in the Westmount neighbourhood include: Glenora Gates, Glenora Mansion, Montego Manor, Park Place Oliver Westmount, Properties on High Street, St. Lawrence Court and Westmount Manor on 124 street. 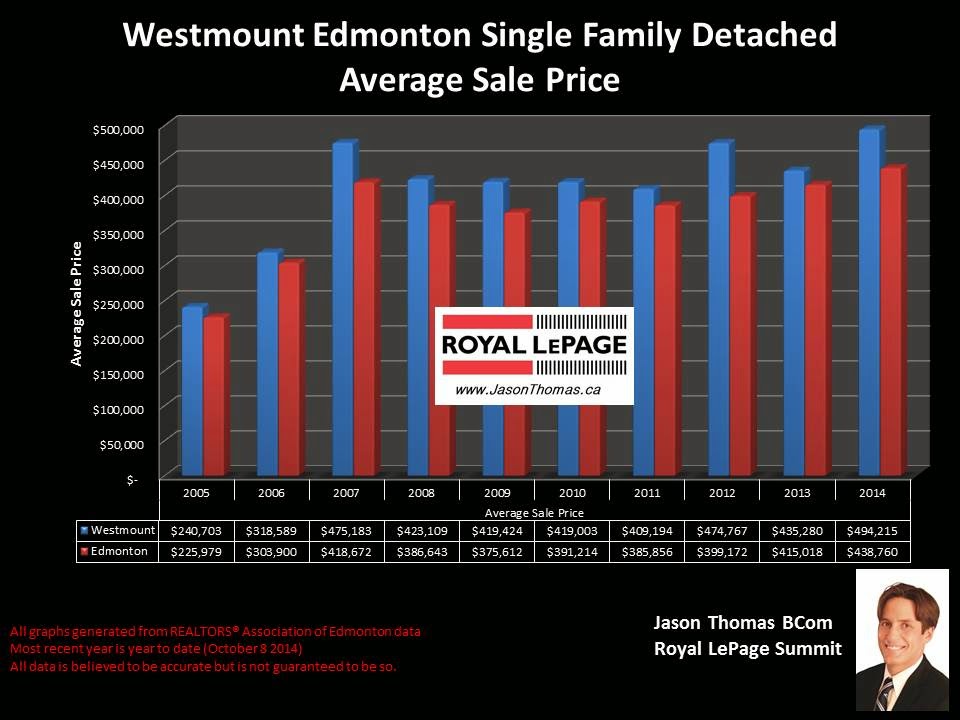