Visit Ellerslie Homes for Sale for active home listings in this southside of Edmonton neighbourhood. The average sale price for a house in Ellerslie so far year to date has reached $456,730.  That is the highest that Ellerslie has sold for on an annual basis.    This average selling price is also up from the 2013 average price of $406,496. However, the 2014 average sale price is skewed higher due to some older homes in the neighbourhood that were on larger pieces of land that sold in the neighbourhood.  These homes were on 2 or 3 acres, and there were 3 of them that have sold this year.  The average selling price stats are based on what a single family detached house sold for in the neighbouhood, the other types of homes namely duplexes or condos are not included in these statistics. In the upper end price segment of the Ellerslie Edmonton real estate market, the highest price that a home sold for so far in 2014 has been $1,030,000.  This home was one of the older 1950's era acreages that sold and it was sitting on 3 acres.  The highest selling price for a home on a traditional sized lot in Ellerslie has been $532,500 and it was a home that backed on to the pond. Moving over to the entry level of the price range in Ellerslie Edmonton, the most affordable home this year has sold for $325,000.  That particular sale was a 2 story style home that was roughly 1400 square feet, and the home did not have a garage.   It is taking 35 days on average to sell a home in Ellerslie year to date in 2014, that is a little bit faster than the Edmonton average days on market in 2014 of 39 days.  Since 2005, real estate property values in Ellerslie have increased by 79%.

In the Ellerslie Edmonton duplex and rowhouse market, the average sale price in 2014 for a duplex/rowhouse has been $323900 with an average time to sell of 36 days.

And lastly, looking at the Ellerslie condo market, condos now have an average selling price for a condo year to date in 2014 of $234,315 On average, it is taking 45 days to sell a condo in Ellerslie this year. The condo complexes that have had units sell in them this year in the Ellerslie Edmonton neighbourhood include: Copperstone, Ellerslie Court, Ellerslie Lane, Park Place Ellerslie, Sandstone Estates and Stonebridge. 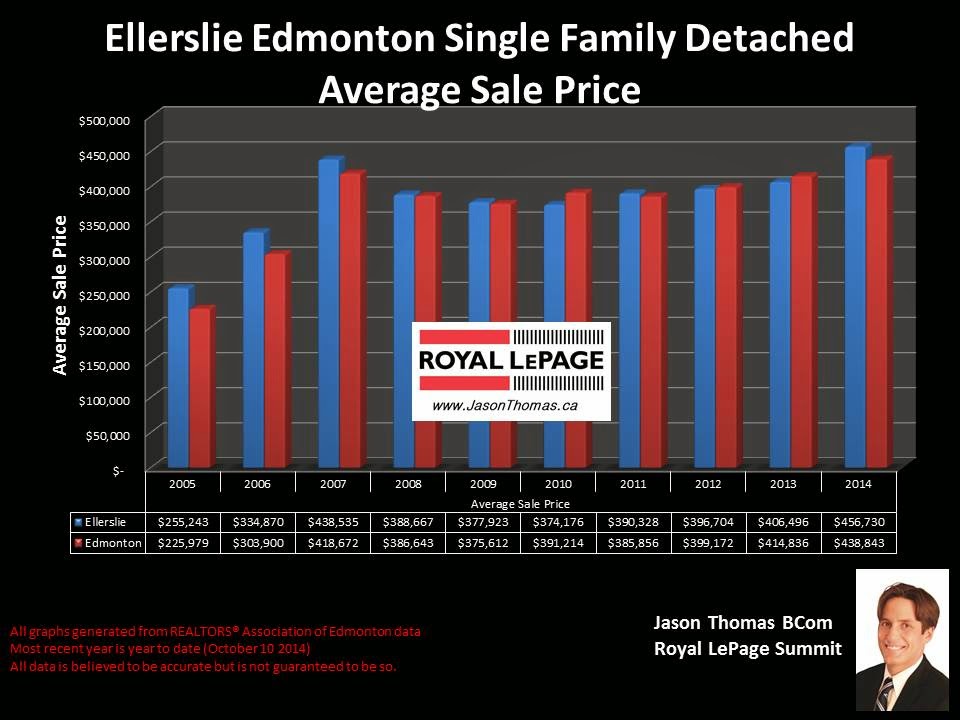