Visit Ritchie homes for sale for current active home, duplex and condo listings in this Mill Creek Ravine area neighbourhood of south Edmonton. So far in 2014, the average sale price for a single family detached home in Ritchie has reached $438,194.  Similar to King Edward Park, the average selling price in Ritchie has really jumped up over 2013.  And also similar to King Edward Park, the Ritchie area has seen a higher and higher number of infill properties being built. The average sale price in King Edward Park in 2013 was only sitting at $378,235. These average selling price values are based on what a single family detached homes sold for in Ritchie, the other types of properties such as duplexes or condos are not included in these statistics. In the high end / luxury price segment of the Ritchie Edmonton real estate market, the highest price that a home sold for so far in 2014 has been $762,000. That particular sale was for a 2300 square foot home that was a newly built infill home. The most affordable house in 2014 has sold for $260,000, and that sale was for a home that was basically just lot value with 33 feet of frontage.  On average it is going to take 31 days to sell a home in Ritchie year to date, that is fairly close to the Edmonton average days on market in 2014 of 36 days.  Since 2005, real estate property values in the Ritchie Edmonton neighbourhood have appreciated by a very substantial 144%.

Again, similar to King Edward, more and more duplex style homes have been built recently in Ritchie.  In the Ritchie Edmonton duplex and townhouse market, the average sale price in 2014 for a duplex/townhouse has been $519571 and the average time to sell a duplex has been 53 days in the neighbourhood.  The highest selling price for a duplex in Ritchie was $635,000, and the most affordable duplex sold for $447,500.  The majority of the duplexes sold in 2014 in Ritchie have been built in 2013 and 2014.

Finally, moving over to the Ritchie condo market, this market segment now has an average selling price year to date in 2014 of $309903. It is taking on average 47 days to sell a condo in this neighbourhood this year. The condo complexes that have had units sell in them this year in Ritchie Edmonton include: Creekside, King Edward Place, Ritchie Place, Scona Gardens, Scona Station, Solstice off Whyte, South Garden and Strathcona Haven. 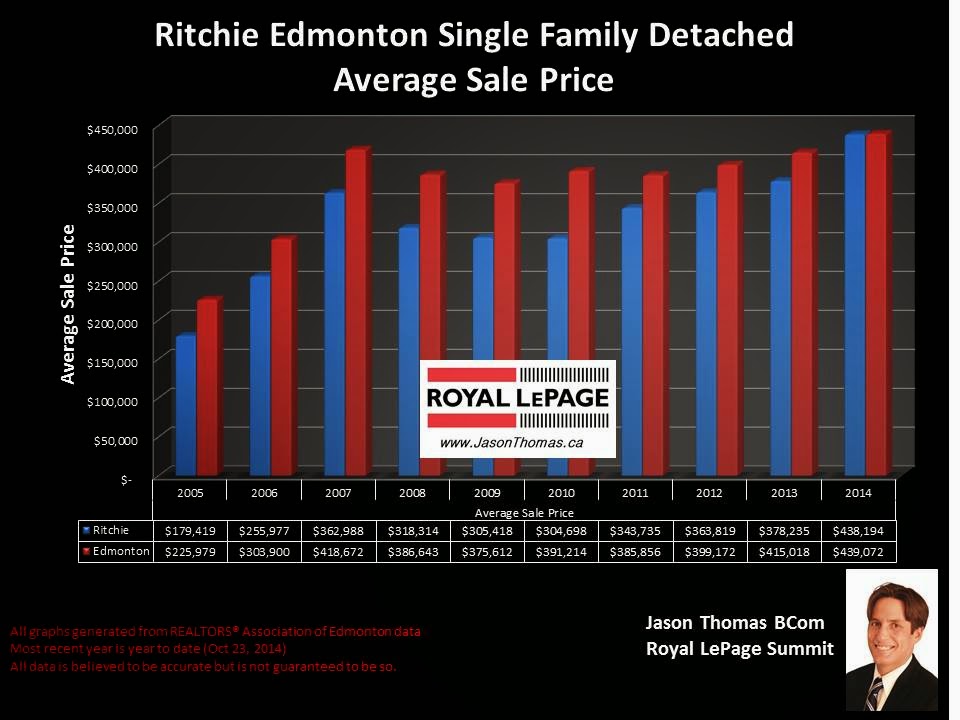