Visit Oxford homes for sale for all current active home, duplex and condominium listings in this popular northwest Edmonton neighbourhood. Year to date in 2014, the average selling price for a single family detached home in the Oxford neighbourhood is sitting at $464,896.  The average selling price in Oxford has increased substantially from last year's average sale price of $418,044. The average selling price values above are based on what a single family detached home sold for in Oxford, the other types of properties such as duplexes or condos are not included in these values. In the upper end / luxury price segment of the Oxford Edmonton real estate market, the highest price that a home sold for so far in 2014 has been $708,000.  That home was a 3300 square foot property with a walkout basement and backing onto a pond.  The most affordable house in Oxford so far in 2014 has sold for $350,000.  That home was a 4 level split style home that sold in multiple offers for more than list price.    On average it is going to take 45 days to sell a home in Oxford Edmonton year to date, that is a little bit slower than the Edmonton average days on market in 2014 of 36 days.  Since 2005, real estate property values in the Oxford Edmonton neighbourhood have increased by a healthy 91%.

Having a look at the Oxford duplex and townhome market, the average sale price in 2014 for a duplex/townhouse has been $338,854 and the average time to sell a duplex has been 31 days in the neighbourhood.  The highest selling price for a duplex in Oxford was $385,000, and the most affordable duplex sold for $304,500.

Finally, moving over to the Oxford condo market, this market segment now has an average selling price year to date in 2014 of $274,461. It is taking on average 56 days to sell a condo in Oxford this year. The condo complexes that have had units sell in them this year in Oxford Edmonton include: Oxford Bay and Oxford Bay Townhomes 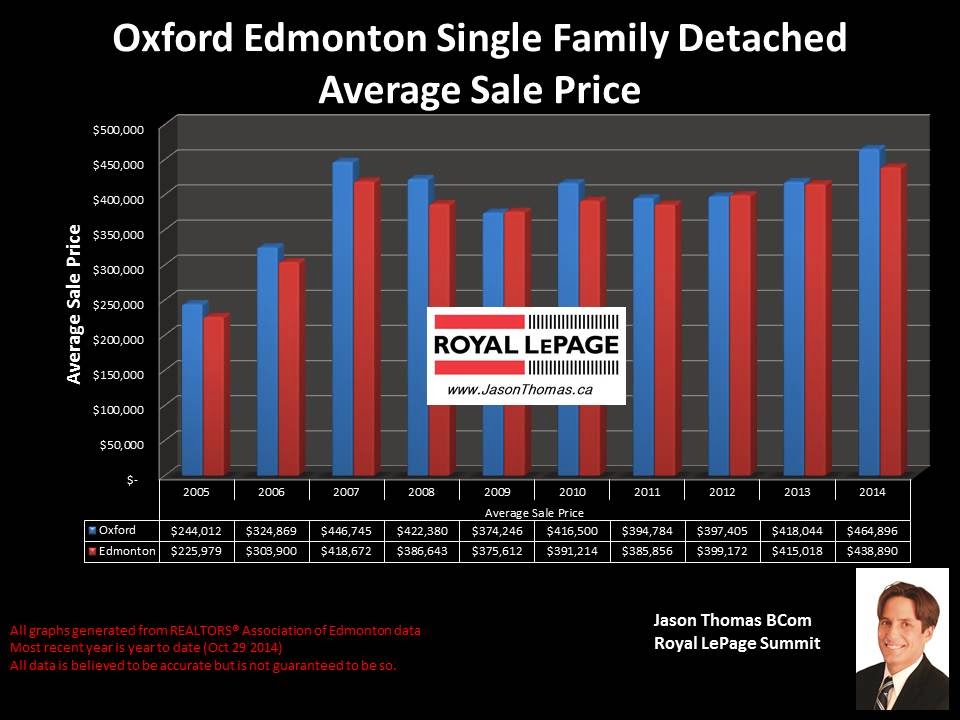 HH Home Buyers said…
Thanks for sharing the information. Its too beneficial for me. :-)
average cost for selling a house