Visit Brintnell homes for sale for current active listings in this Northeast Edmonton neighbourhood. The average selling price for a house in Brintnell so far year to date has been $412,888.    The 2014 average selling price in this northeast Edmonton neighbourhood is up from the 2013 average sold price of $400,141. Brintnell remains popular with young families and has decent access to the LRT (light rail transit) located nearby in Clareview.  These average selling price statistics are based on what a single family detached house sold for in the neighbouhood, the other types of homes namely duplexes or condos are not included in these statistics. Having a look at the upper end price segment of the Brintnell real estate market, the highest price that a home sold for so far in 2014 has been $505,000.  This home was one of two homes that have sold for more than $500,000 in Brintnell this year.  The sale for $505,000 was for an almost 1600 square foot bilevel style home with a fully developed basement.    Over at the lower end of the price range spectrum in the neighbourhood, the most affordable home in the neighbourhood sold for $295000 this year.  That home was a 2 story style home that did not have any basement development and it did not have a garage.  That one sale was the only one that sold for less than $300,000 in Brintnell this year.  It is taking 42 days on average to sell a home in Brintnell in 2014, that is very similar to the Edmonton average days on market in 2014 of 39 days.  Since 2005, real estate property values in Brintnell have increased by 73%.

In the Brintnell duplex and rowhouse market, the average sale price in 2014 for a duplex/rowhouse has reached $341,975, with an average time to sell of 32 days.

The Brintnell condo market, has an average selling price for a condo in 2014 of $305990.  On average, it is taking 64 days to sell a condo in Brintnell this year. The condo complexes that have had units sell in them over the last 12 months in this Northeast Edmonton neighbourhood include: Brintnell Landing and Brintnell Summit 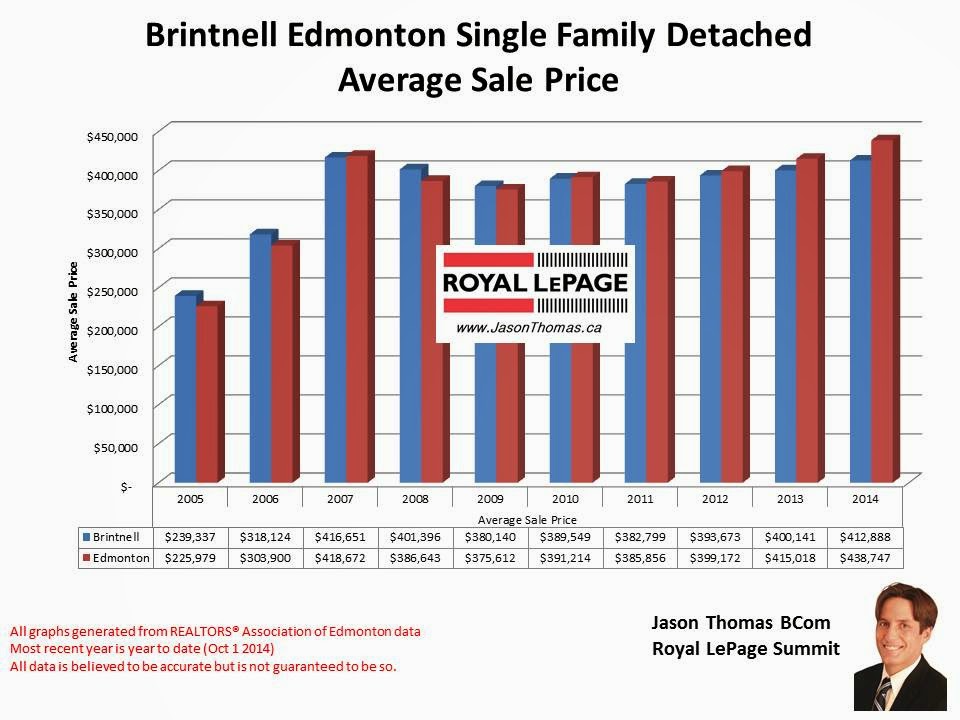