View Carlton Homes for sale for active home and condo listings in this Northwest Edmonton neighbourhood. The average sale price for a home in the Carlton Edmonton neighbourhood year to date is currently sitting at $467,590.    The Carlton Edmonton average selling price is up from 2013, in that year Carlton averaged $454,164.    In Carlton, roughly 80% of the sales this year were of single family detached homes that have front attached garages. The average selling price stats are based on what a single family detached house sold for in the neighbouhood, the other types of homes namely duplexes or condos are not included in these statistics. In the upper end luxury price segment of the Carlton real estate market, the most that a home sold for so far in 2014 has been $595,000.  There have been quite a few sales in the high $500,000's but none cracked the $600,000 price point.  The home that sold for $595,000 was located near Carlton Lake and the home was a large executive bungalow roughly 1700 square foot in size.  Having a look at the entry level of the price range in Carlton, the most affordable home this year has sold for $325,000.  That home was a front to back 4 level split style home and it did not have a garage. This sale was one of four homes that have sold this year for  under $350,000 in the Carlton neighbourhood.   It is taking 60 days on average to sell a home in Carlton so far in 2014, that is slower than the Edmonton average days on market in 2014 of 39 days.  Since 2005, real estate property values in Carlton have appreciated by 90%.

In the Carlton duplex and rowhouse market, the average sale price in 2014 for a duplex/rowhouse has been $349,870 with an average days on market the same as single family detached homes, namely 60 days.

Finally, looking at the condo market in Carlton, the average sale price for a condo year to date in 2014 has been $288,044. On average, it is taking 35 days to sell a condo in this northwest Edmonton neighbourhood this year.  The highest price that a condo has sold for in Carlton this year was $479,000 and that unit was a half duplex style in the Carlton Villas on the Lake complex.  The most affordable condo in Carlton sold this year was sold for $177,000, that unit was a one bedroom unit in the Tuscan Village condo complex.  The condo complexes that have had units sell in them so far in 2014 in the Carlton Edmonton neighbourhood include: Carlton Villas on the Lake, Tuscan Village and Upper Carlton. 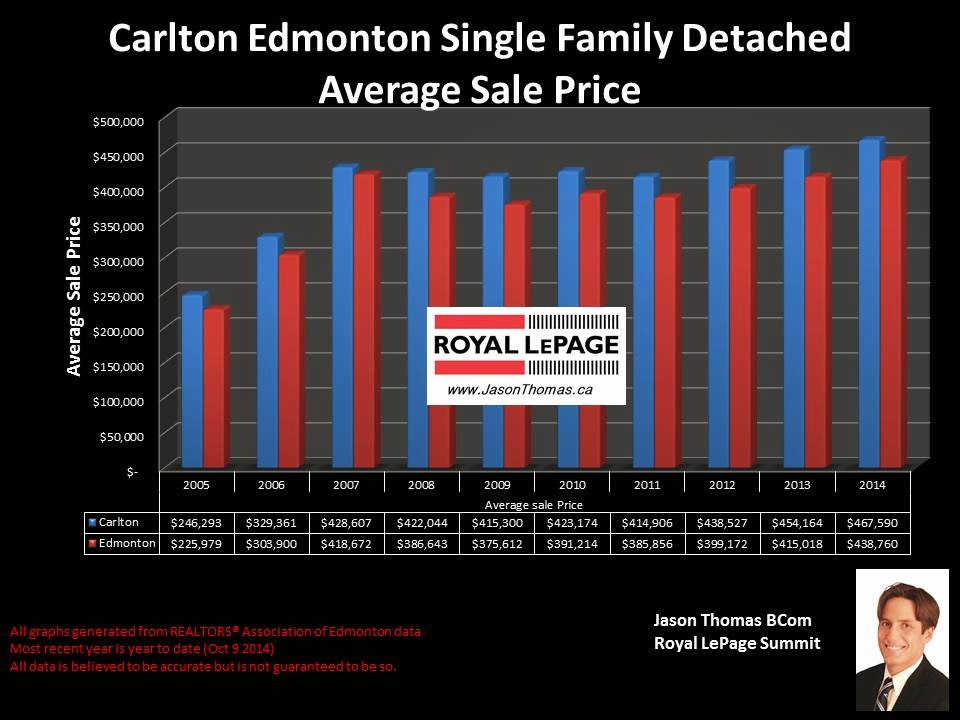