Click Delton homes for sale for active MLS® listings of houses, duplexes, townhomes and condos for sale in this inner city of Edmonton neighbourhood.  As we finish off 2014, the average sale price for a single family detached house in Delton for the 2014 calendar year has now reached $278,737. That is a big jump higher from 2013 where the average selling price was only $229,560.  That works out to an annual increase in property values of 21%!  The impressive part of this move higher, is that most of these homes were older, the average didn't bump up based on several newly built infill homes.  These average sale price amounts above are based on a single family detached home sale; the other property classes such as duplexes or condominiums are not included in these average selling price statistics.    In the high end / luxury price market segment of Delton Edmonton, the highest price that a home sold for so far in 2014 has been $399,000.  That home was an infill, built in 2007, but that was the only newer home that sold this year in Delton.  It was a two story style 1740 square foot home.    At the entry level end of the market for Delton Edmonton,  the most affordable priced home sale in the neighbourhood sold for $149,000.  That home was basically sold for lot value and had no real value in the structure.  On average it has been taking only 45 days to sell a home in Delton, Edmonton this year. This is a little slower than the Edmonton average days on market of 40 days in 2014.  Looking back to 2005, Delton real estate property values have increased by a healthy 104%.

Looking at the Delton Duplex market, the average sale price in 2014 has been $302,125.  Unlike the single family detached market, the duplex market in Delton has had more sales of infill properties.  Roughly half the sales were newer duplexes built in the last couple years.  These newer infill homes tend to sell for more and pull the average up.  The average time it has taken to sell a duplex in Delton this year has been 56 days.
Lastly, looking at the condo market in Delton , the average selling price for a condo this year in Delton has been $287,500.   The average time it takes to sell a condo in Delton has also been 27 days this year.  The condo complex in Delton that have had units sell in them this year was an unnamed half duplex condo on 91st street that was recently built (2013). 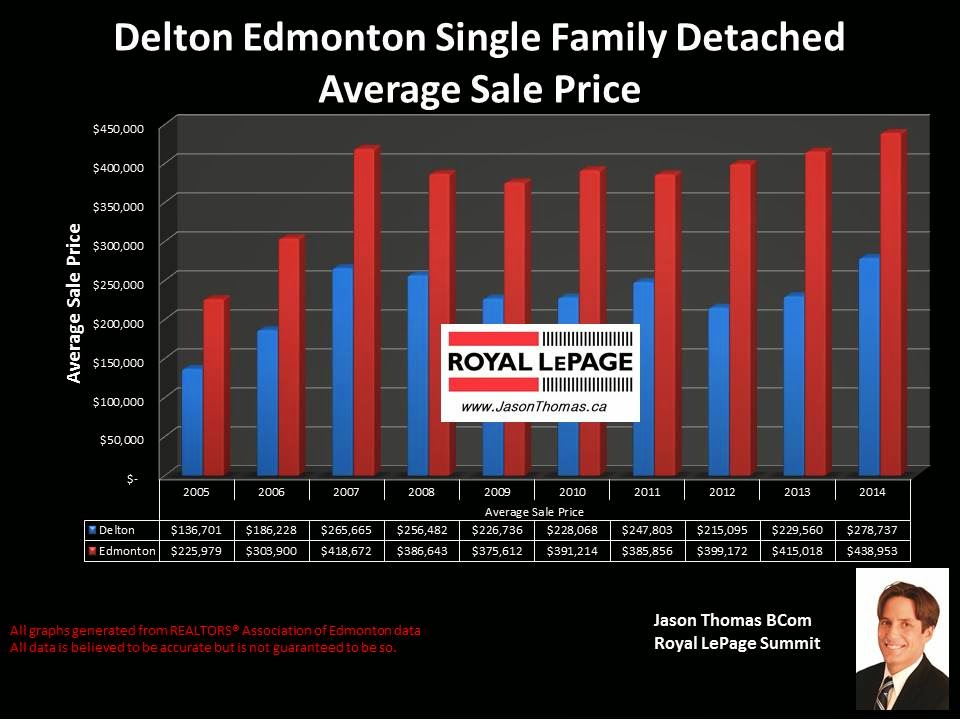