Visit Lymburn homes for sale for all active listings in this west end neighbourhood of Edmonton.  So far in 2014, the average selling price for a home in the Lymburn area this year has reached $355,251.  This average price is up from 2013 where Lymburn was selling for $345,426.    These average selling price statistics are created by looking at what a single family detached home sold for in the neighbourhood, the other styles of homes such as duplexes or condominiums are not included in the above averages. At the high end of the Lymburn real estate market this year, the highest price that a home has sold for has reached $481,000.  That sale was for a renovated home that was over 2300 square feet. The selling price was higher than the list price and likely was the result of a multiple offer (more than one buyer offering on the home at the same time).    Meanwhile at the other end of the selling price range for Lymburn, the most affordable home in the neighbourhood in 2014 has sold for $257,000.  It was a front to back 4 level split that needed extensive renovations.  There have only been 2 homes so far this year that have sold under $300,000 in Lymburn. On average it is taking 37 days to sell a home in Lymburn this year, and that is basically the same as the Edmonton average time to sell in 2014 namely 38 days. Comparing real estate prices back over the past several years, since 2005 the property values in Lymburn area have increased by 79%.

Moving over to the condo market in Lymburn, the average sale price in 2014 is currently sitting at $208,060 with an average time to sell a condo in Lymburn of 34 days.  The condo complexes that have had a unit sell in them over the last 12 months in Lymburn include the following: Sunset Point, Surrey Gardens, Willow Court, and Willow Circle.  The majority of these complexes are townhome style, although Surrey Gardens is a carriage style (also known as coach style) of condominium. 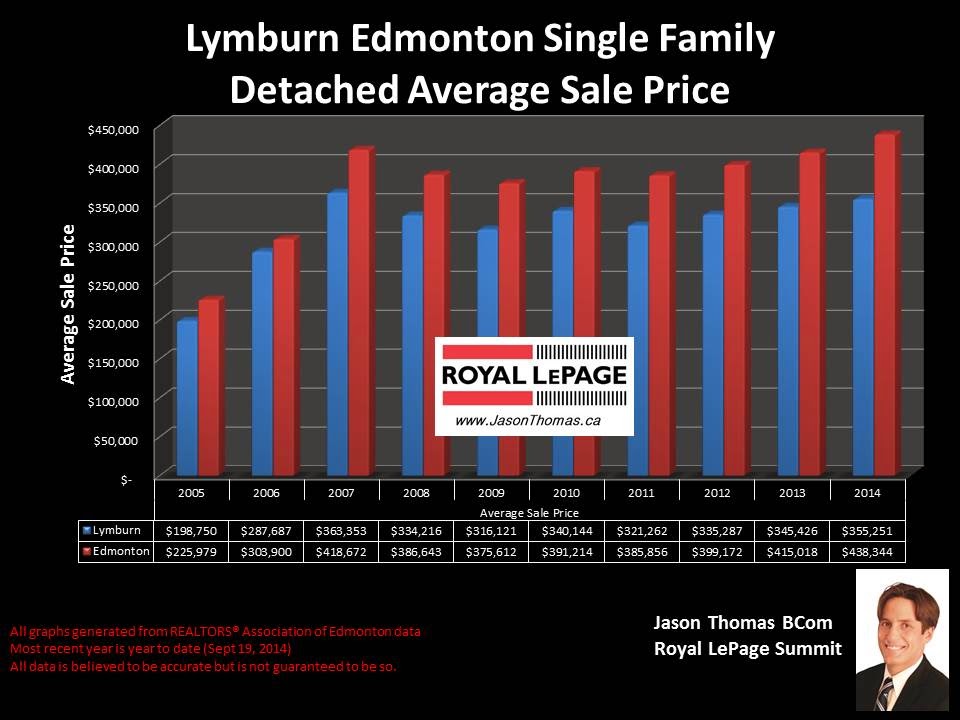