Click Here for all Calder homes for sale in Northwest Edmonton.  The average selling price for a home in Calder year to date is affordable at $282,932.  That is substantially higher than 2013, when Calder was only averaging a sale price of $232,988.  The average sold price in Calder is substantially lower than the Edmonton average selling price.  The neighbourhood tends to have higher property values the further north you go (closer to Kensington and 132 avenue).  The more affordable homes that are smaller and often rentals are closer to 127 avenue.  The selling price average statistics are calculated by looking at what a single family detached home sold for in the neighbourhood, the other styles of homes like  duplexes or condos are not included in these stats.  In Calder, at the upper end of the market, the highest price that a home sold for so far in 2014 has been $490,000.  That sale was for an infill home that was almost 2000 square feet.  At the other end of the price range, the most affordable home in Calder in 2014 has sold for $135,000.  That sale was for a home that needed extensive work and was approaching lot value.  On average it is taking 37 days to sell a home in Calder this year, and that is basically the same as thel Edmonton average time to sell in 2014 of 38 days.  Since 2005, property values in Calder have increased by a healthy 102%
In the Calder duplex market in 2014, the average sale price has reached $356,714 so far year to date. There have been some side by side duplexes as well as newer infill duplexes that have pushed the average sale price higher.  The days on market average for a duplex in Calder so far this year has been 49 days.
Moving over to the condo market in Calder, the average selling price for a condo so far in 2014 has been $155,875.  The majority of condos in Calder are the older rental conversions.  The time it takes to sell a condo in Calder has been quick only 21 days so far in 2014.  The condominium complexes that have had units sell in them in Calder over the last 12 months include: Pioneer Apartment and the Capri 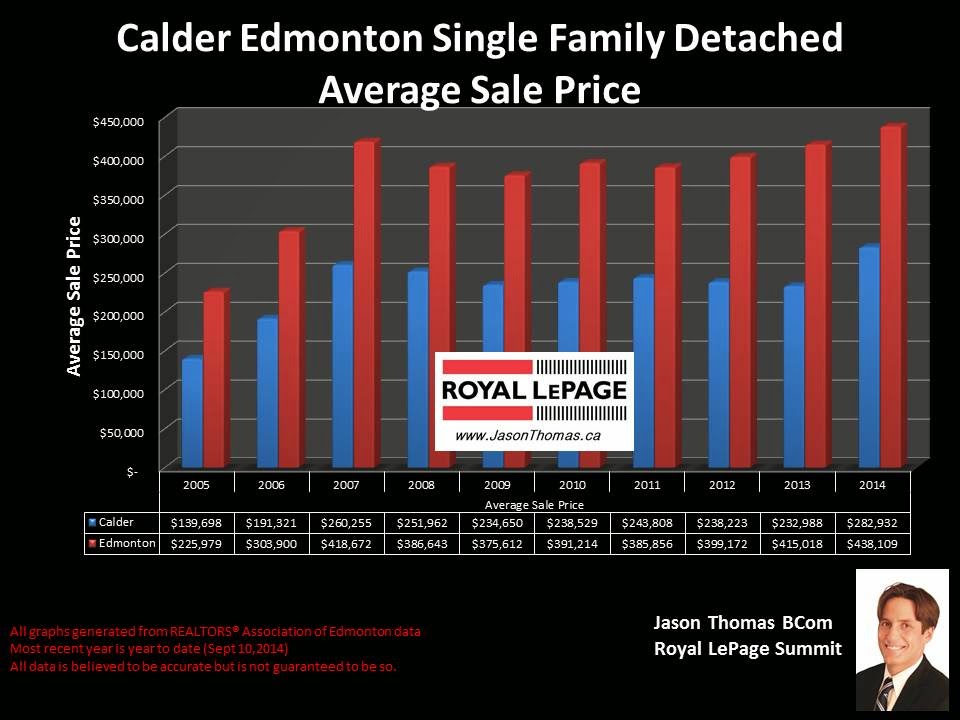