Visit  Allendale homes for sale for all active listings in this University of Alberta area neighbourhood in South Central Edmonton.  Year to date in 2014, the average selling price for a home in the Allendale area this year has been $417,655.  This is substantially up from 2013 where Allendale was selling for $386,440.  Allendale has been seeing more and more infill homes, single family and duplex style, being built in recent years.  These average selling price stats above are created by looking at what a single family detached home sold for in the neighbourhood, the other styles of homes such as duplexes or condominiums are not included in the above statistics  At the upper end of the Allendale real estate market, the highest that a home has sold for in 2014 has been $730,000.  That sale was for an infill home on 69 avenue, it was almost 2300 square feet in size.   Meanwhile at the other end of the price range for Allendale, the most affordable home in the neighbourhood so far in 2014 sold for $280,000 and it did not have a basement.  That sale was for a small 600 square foot home.  Most of the homes that were listed under $300,000 ended up selling for more than list price this year in Allendale.  That is normally due to multiple offers, in effect more than one buyer offering on the home.  On average it is taking 33 days to sell a home in Allendale this year, and that is a little faster than the Edmonton average time to sell in 2014 which has been 38 days. Going back over the past several years, since 2005 the property values in Allendale area have increased by 90%.

In the Allendale duplex real estate market, the average selling price for a duplex has reached $532,000.  The average time to sell a duplex in Allendale has been 62 days.  Most of these duplexes that sold were infill homes built in the last 2 years.

Moving over to the condo market in Allendale, the average sale price in 2014 is currently sitting at $459716 with an average time to sell a condo of 69 days. 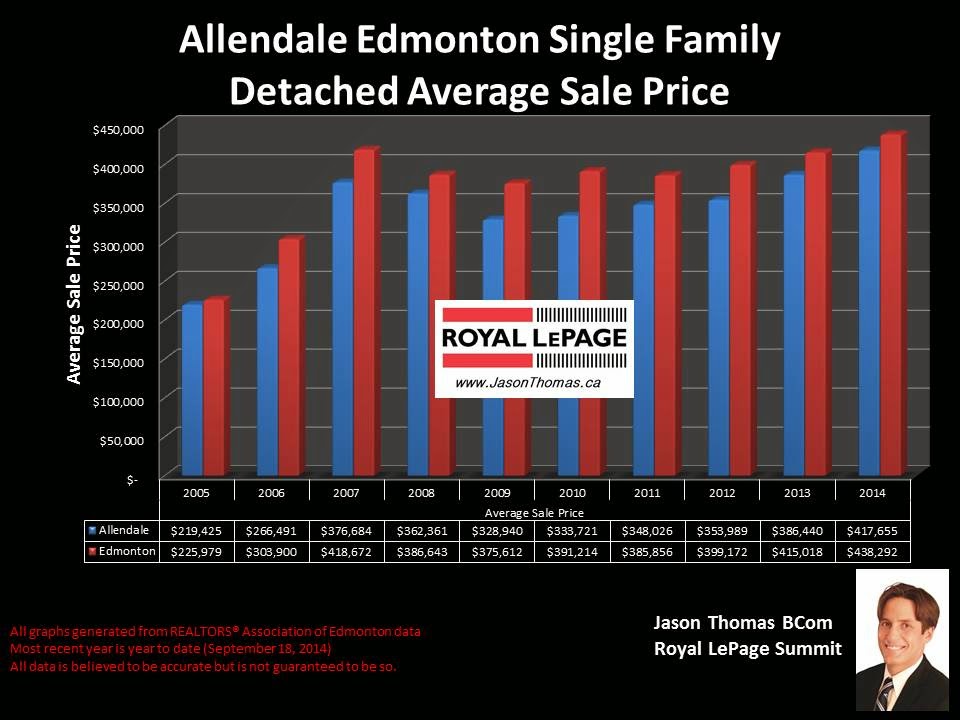