The average selling price for a home in the Highlands neighbourhood of Edmonton has decreased in 2016 to $398,196.  This is well off the 2015 average, but much closer to the 2014 average.  When you look at the sales statistics in 2015, the average there were a higher number of homes selling in the $700,000 plus range in 2015 and that tended to bring the average up quite a bit. The average time it takes to sell a home in the Highlands this year has been 47 days.
To see all the homes listed for sale in the neighbourhood visit  Highlands Homes for Sale in Edmonton 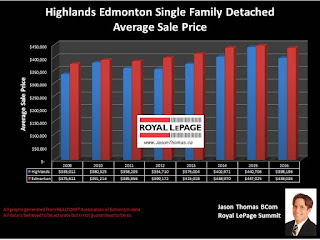