Visit Meyonohk Mill Woods homes for sale for active listings of houses, duplexes and condos for sale in this southeast Edmonton neighbourhood. So far in 2014, the average sale price for a single family detached home in Meyonohk has reached $353,877. Meyohonhk is now selling just above the peak selling price for the neighoburhood that was set in the boom of 2007.  The selling price average is up from last year, in 2013 Meyonohk was selling for $331,470. These average sold price values above are based on a single family detached home sale; the other property classes such as duplexes or condominiums are not included in these average selling price stats.  In the upper end / luxury price segment of the Meyhonohk Mill Woods Edmonton real estate market, the highest price that a home sold for so far in 2014 has been $430,000.  That home was a larger bungalow with an attached garage and a basement suite.     At the entry level end of the price range in Meyonohk, the lowest sale price for a home in 2014 in the neighbourhood sold for $285,000. That was one of only three homes in this Mill Woods neighbourhood that sold for less than $300,000. The home that sold was roughly 800 square feet, a bilevel style and it did have a double detached garage. On average it takes 29 days to sell a home in Meyonohk in 2014.  That is faster than the Edmonton average days on market of 40 days this year, and in the entire area of Mill Woods, the average time to sell this year has been 32 days.  When you go back to 2005, the real estate property values in the Meyonohk neighbourhood have increased by 95%.

Moving over to the condo market in Meyonohk, condominiums are selling on average for $198,364 and on average it takes 39 days to sell a condominium in Meyonohk this year. At the high end of the market, the highest price that a condo has sold for in the neighbourhood this year has been $317,000, and the most affordable condo in the neighbourhood sold for $166,800. The Meyonohk condo complexes that have had units sell in them this year include: Cedarwood Court, Emerald Place, Greenwood Grove, Lakewood Estates, Meyonohk Meadows, Pinetree Village, Regency Carrington and Springvale 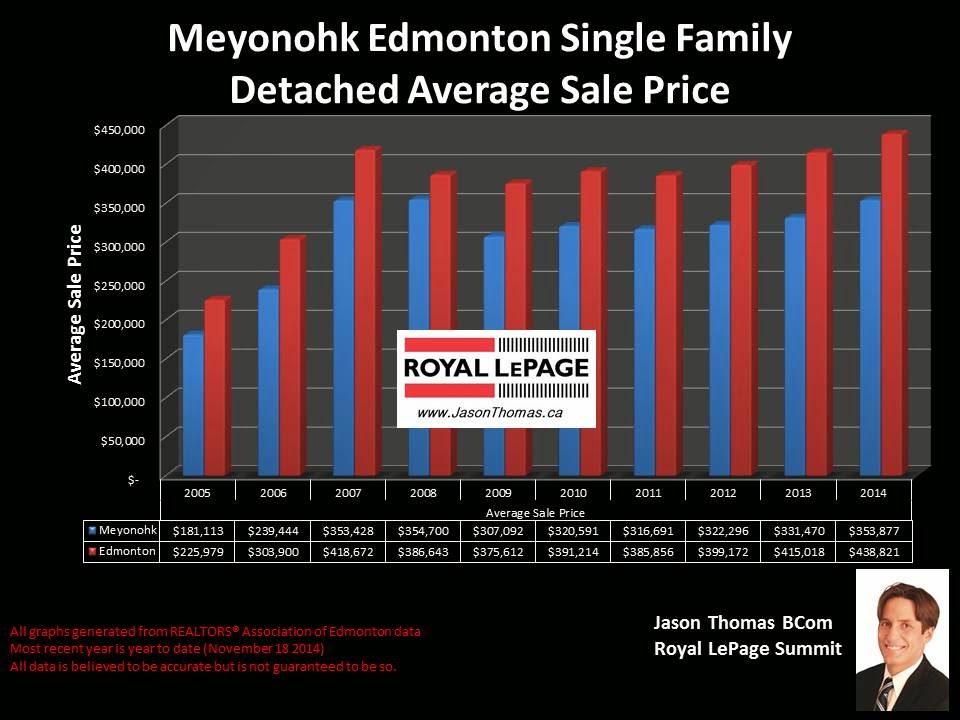