Visit Belmont homes for sale  for active listings of houses, duplexes and condos for sale in this neighbourhood in Clareview, Edmonton. Year to date in 2014, the average sale price for a single family detached house in Belmont is sitting at $363,892. This is pretty close to the overall average selling price for a house in the entire Clareview neighbourhood, and that average sale price is $365,784.  Belmont property values have risen by roughly $20,000 from last year's average sale price of $342,106.  The above average sale price numbers above are based on what a single family detached house sold for in Belmont, the other property classes such as duplexes or condos are not included in these average sale price stats. In the upper end / luxury price segment of the Belmont Edmonton real estate market, the highest price that a home sold for so far in 2014 has been $444,000.  That home was a bilevel style with the master bedroom up over the garage.  The home was on a pie lot as well.  At the other end of the price range, the most affordable home sale in Belmont in 2014 sold for $295,000. That home sale was a four level split that sold early in the year.  On average it takes 42 days to sell a home in the Belmont Edmonton neighbourhood year to date, that is very close to the Edmonton average days on market of 39 days in 2014.  Going back to 2005, real estate property values in the Belmont Edmonton neighbourhood have increased by 71%.

The duplex / townhome market in Belmont have made up a good percentage of sales this year, approximately 30% of the sales in 2014 in Belmont were duplexes.  The average sale price for a duplex in Belmont, Edmonton in 2014 has reached $254,262.  On average, it is taking 35 days to sell a duplex in Belmont this year.  The highest price that a duplex has sold for has been $300,000 this year, and the most affordable duplex sold for only $203,000.

Lastly, looking at the condominium market in Belmont,  the condo market now has an average selling price year to date in 2014 of $211,041.  It is taking on average 57 days to sell a condominium in Belmont this year. The most that a condo has sold for in Belmont this year has been $330,000, and the most affordable condo in Belmont sold for $145,000. The condo complexes that have had units sell in them this year in Belmont Edmonton include: Brook Haven, Chelsea Greene, Claregreen Mews, Claregreen Square, Clareview Place, Clareview Village, Green Manor Gardens, Green View Place 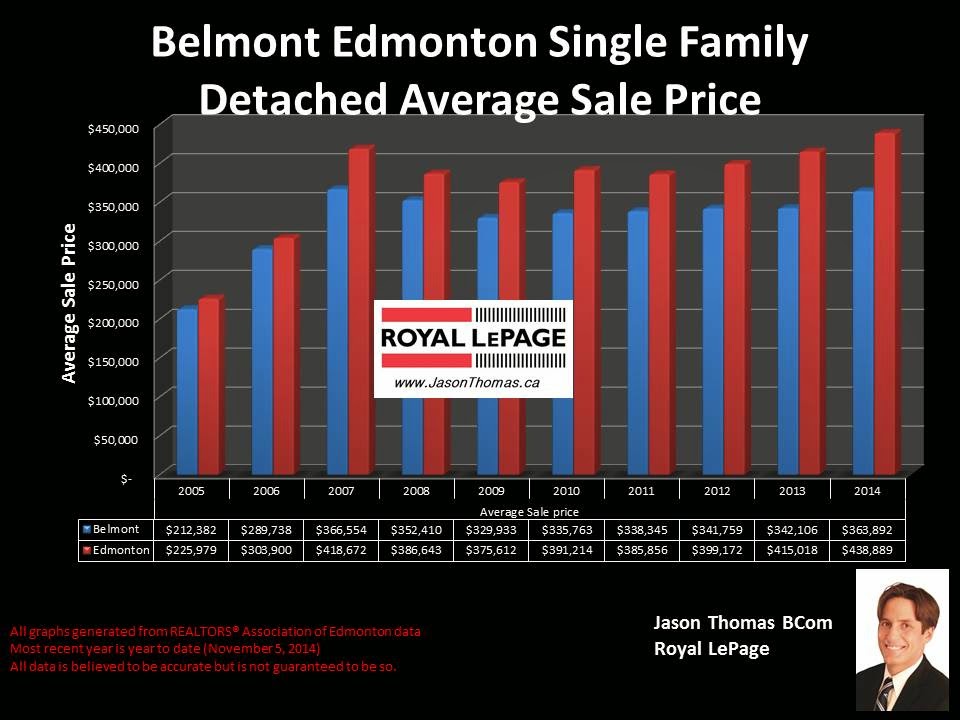